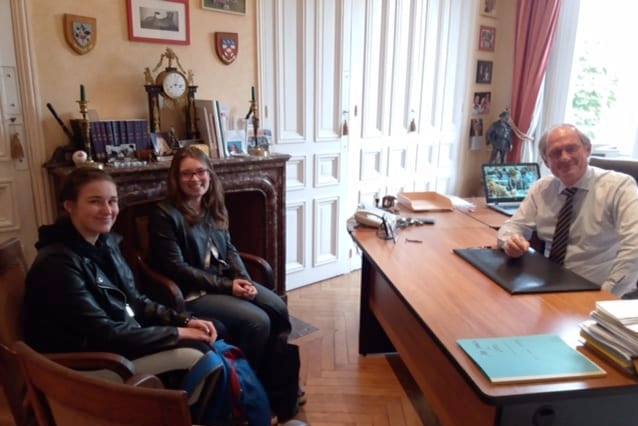 The French exchange program is very educational as well as fun, you’ll never get an experience like this one so you shouldn’t pass up on the opportunity. It can be intimidating at first, listening to everyone around you talking in a foreign language and only understanding small snippets of the conversation. But nearing to the end of the week, it gets easier to follow the conversation and your French will have improved. When on the French exchange trip, you learn to step out of your comfort zone and try new things.

Throughout my time in France with my exchange partner, Emma, I mostly relied on google translate before I would say anything, because I didn’t want to embarrass myself. However, the students at Jean-Paul II were really understanding and kind, plus when I made a mistake it can just be something for us to laugh about, because their English isn’t perfect either. In fact, during English lessons, which were my favourite, it was entertaining to hear them talk in English which was probably the same for them when I spoke French. In English lessons, I liked to help out, because it’s easy to get the English tenses mixed up and pronounce words differently and it was the only lesson I could completely understand.

Coming from a small school, I felt quite intimidated by the size of the school (Jean-Paul II has roughly 3,000 students and 200 teachers), but all the students I met were helpful, funny and genuinely nice. Students who knew English tried to make me feel slightly at home, and those who didn’t made an effort. Pretty soon I realised that I didn’t have to worry so much because none of the people I met made me feel like I was being judged. The Jean-Paul II Institute of learning was very centred on the educational part, thus not providing lessons like art or music, instead providing Philosophy lessons. And the days are quite long compared to Oakhill’s school hours; lessons at Jean-Paul II begin at 9am on Monday and 8am Tuesday to Friday as opposed to Oakhill’s hours which start at 9am each day. However at Jean-Paul II they have longer holidays than at Oakhill.

A thing I shouldn’t be proud of is that I learned was how to use google translate properly, but I did learn some more French and now I feel more comfortable talking in French, I think.